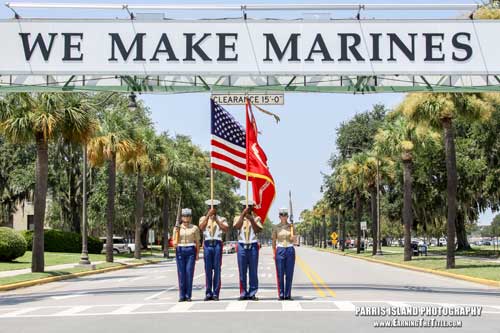 Marines were first stationed on Parris Island in 1891, in the form of a small security detachment headed by First Sergeant Richard Donovan. His unit was attached to the Naval Station, Port Royal, the forerunner of Parris Island. Donovan’s unit was highly commended for preserving life and property during hurricanes and tidal waves that swept over the island in 1891 and 1893.

Military buildings and homes constructed between 1891 and World War I form the nucleus of the Parris Island Historic District. At the district center are the commanding general’s home, a 19th century wooden dry dock and a turn-of-the-century gazebo—all of which are on the National Register of Historic Places.

On November 1, 1915, Parris Island was officially designated a Marine Corps Recruit Depot and training was continued from then on.  The first Marines trained on Parris Island saw battle in the trenches of France during World War I.  More than 46,000 Marines were trained for duty in World War I. Between the years 1922 to the mid 1930s, recruit trainings slowed with only about 300 recruits reporting each month.

Prior to 1929, a ferry provided all transportation to and from the island from Port Royal docks to the Recruit Depot docks. In that year the causeway and a bridge over Archer’s Creek were completed, thus ending the water transportation era. The causeway was dedicated as the General E. A. Pollock Memorial Causeway in April 1984.

During the fateful December of 1941, 5,272 recruits arrived on Parris Island with 9,206 arriving the following month, making it necessary to add the 5th, 6th, 7th and 8th Recruit Training Battalions. As the war influx continued, five battalions were sent to New River, North Carolina, to train, and the Depot expanded to 13 battalions. From 1941 through 1945, the Marines trained over 200,000 recruits here and at the time of the Japanese surrender, the Depot contained more than 20,000 recruits.

In 1946 Marine Corps leaders reorganized Parris Island and decided to give it a designation that would reflect its primary mission – the training of Marine Corps recruits, thus the world famous Marine Corps Recruit Depot Parris Island, South Carolina was born.

The Korean War began in 1950 when 2,350 recruits were in training. From then until the 1st Marine Division withdrew from Korea, Parris Island drill instructors trained more than 138,000 recruits. During March 1952, the training load peaked at 24,424 recruits. The recruit tide again flooded during the years of the Vietnam War, reaching a peak training load of 10,979 during March 1966.

Currently, the Marines train about 19,000 recruits at Parris Island each year.  Today, the primary mission of Parris Island continues to be the producing of highly disciplined basically trained Marines.